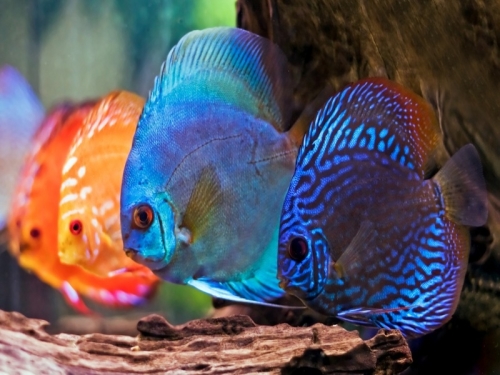 The Discus fish belong to the Family of cichlidae and is characterised by a colourful and compresed disk-shaped body which makes it the most popular freshwater ornamental fish, among aquarium hobbyist worldwide.
Early studies have showed that the genus of Symphysodonincluded two species devided into five subspecies. However, recent work have identified three species; S.discus Heckel, 1840 (Heckel discus), S. aequifasciatus Pellegrin, 1904 (Blue or Brown discus) and S. tarzoo Lyons 1959 (Green discus), orS.discus, S.haraldi Schultz, 1960 and S. aequifasciatusaccording to some other authors.
Symphysodon is primarily found in the warm acidic waters of the Amazon where it lives between crevices and roots. S. discus is found in the tributaries of the rios Negros, Purus, Abacaxis and Trombetas, Green Discus is found in the Western Amazon and the brown and blue are widely distributed from the west to the east of the rio Amazonas. It is mainly live in schools but it becomes aggressive and very territorial when it is to mate.